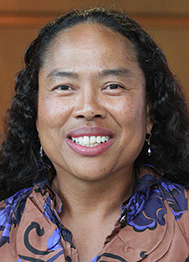 the prosecution of sex traffickers, has been named a scholar in residence at the University of California Berkeley School of Law.

Cook's appointment is part of Berkeley Law's Visitors in Residence program, which brings internationally recognized social justice practitioners, academics and leaders to Berkeley Law for an extended time to share their expertise. During her stay in mid-October, Cook will deliver a series of lectures that address the ways in which the law creates vulnerability for the purpose of both labor and sexual exploitation.

Her most recent paper, "Stop Traffic: Using Expert Witnesses to Disrupt Intersectional Vulnerability in Sex Trafficking Prosecutions," will be published in the Berkeley Journal of Criminal Law next spring. The paper is the first of its kind and addresses the ways in which intersectional, feminist and other critical theories can be used to maximize the use of expert witnesses in sex trafficking cases.

Prior to joining academia, Cook was an assistant U.S. attorney with the Department of Justice, where she specialized in large-scale drug and sex-trafficking prosecutions. In that capacity, she briefed and/or argued more than 40 federal appeals.