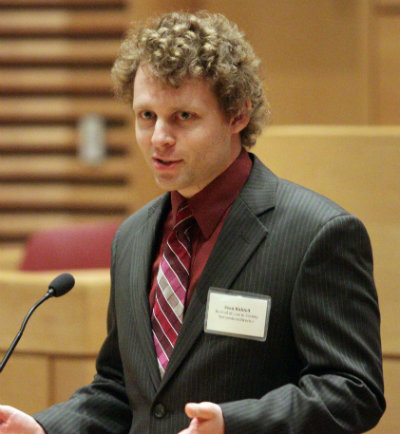 The award is presented each year to WSU undergraduate and graduate students who best exemplify the values of the university's students who fought fascism in Spain in the 1930s. This is the 33rd year the scholarships have been given.

Recipients will be honored Friday, June 17. Riddell will receive a $1,000 scholarship.

Under his leadership, students involved in the guild have consistently advocated for a more inclusive community. As a second-year student, he was the lead organizer for the guild's Mideast Regional Conference, which featured 10 speaker panels, including topics such as the Detroit housing crisis, the school-to-prison pipeline and emergency management.

In February, Riddell was honored as an Outstanding Law Student of the Year by the National Lawyers Guild Detroit and Michigan Chapter.

He served as director of The Journal of Law in Society's 2016 symposium, "A Tribute to Professor Emeritus Edward J. Littlejohn and His Work with Race, Racism, and the Law," in March.

Additionally, Riddell has been active in the American Civil Liberties Union and the Wayne Law Team, a group of students who researched issues for the DeBoer v. Snyder marriage equality litigation team.

For the past year, Riddell worked part time for the civil rights law firm of Goodman & Hurwitz PC in Detroit. He will be working for the legal aid organization Counsel & Advocacy Law Line in Southfield after taking the bar examination.

He earned his undergraduate degree from the University of Michigan in 2009 with a major in American culture and minors in music and history.