Unifying people to give them a more powerful voice is a skill Jeremy Orr brings to his job. 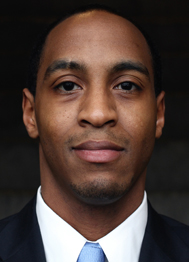 Orr's new three-year position with Wayne Law is made possible through a $450,000 grant the clinic received last summer from the Fred A. and Barbara M. Erb Family Foundation. The foundation's mission is to "nurture environmentally healthy and culturally vibrant communities in metro Detroit, consistent with sustainable business models, and support initiatives to restore the Great Lakes ecosystem."

"The support will enable us to set up an Air Advisory Committee for environmental justice communities and to engage in policy research and development aimed at reducing the impacts of pollution on these communities. In addition, the grant has made it possible for us to hire Jeremy. He will work closely with the Michigan Environmental Justice Coalition and Great Lakes Environmental Law Center, and we are all very excited to get to work on these critical issues."

Orr had been working as executive director of the Mid-Michigan Environmental Action Council and spent nearly three years as the lead community organizer with the Gamaliel Foundation affiliate in Kalamazoo. He holds a master's degree in criminal justice with a focus on conservation criminology and a bachelor's degree in public health, both from Michigan State University. Later this year, he expects to earn his law degree from MSU's College of Law, where he has focused his studies on environmental and natural resources law.

He's happy to be back, living again in his hometown of Detroit, and to be in a job that allows him to use his legal and advocacy skills to promote environmental justice, which he calls his "passion."

Orr gained experience with environmental policy and environmental justice as part of the management team of Transportation for Michigan, Board of Directors of the Michigan Student Sustainability Coalition, Social Equity Committee of the Michigan Association of Planning and Executive Committee Recruitment Team of the Sierra Club's Michigan Chapter.

He got more interested in the field of environmental justice when he began working on transportation reform in the state.

"All of the stakeholders seemed to work in environmental issues, as well, and I noticed the lack of minority representation in all of the environmental circles," Orr said. "I wanted to be someone who could help fill that void."

In the new job, Orr is doing a lot of listening.

"You have to spend time meeting with individuals and stakeholders and take the time to identify the key issues," Orr said. "All the different people and personalities make it fun for me."

One of his biggest initial tasks will be to establish the advisory committee to tackle the issues of local air quality.

"Over time, we'll have the stakeholders, policy people, community associations and residents look into the issues of permitting," Orr said. "Through the coalition, we'll work on that, as well, and it could spin into some other issues."

An important part of the job is to bring people affected by the issues together to join their voices.

"It's about building power that actually affects real change," Orr said. "The only way you can do that is through genuine relationships. It can't just be surface networking. It's about building trust. That's what forms organizations that have lasting bonds."