Bruce Miller, who served as attorney for the Labor Hall of Fame and is genera 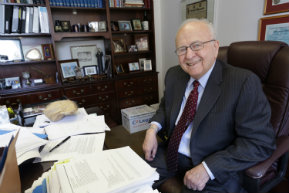 l counsel for the Metro AFL-CIO in Detroit, believes in the rights of working people.

"Being a lawyer to the labor movement is my calling," Miller, a 1954 alumnus of Wayne State University Law School, wrote in his 2005 memoirs for his children.

"It provides me with an opportunity to be part of a large, vital movement that struggles constantly to make gains for working people, and hang onto those gains. Mine is an exciting calling and it has given my life meaning. The values that led me to be a labor lawyer led me to be a civil rights lawyer. Thus, everything I have done in my workaday life has been done in order to bring rights to people and strengthen the rights of people. It's a pretty good way to make a living."

Judge Avern Cohn of the U.S. District Court for the Eastern District of Michigan is familiar with Miller and his legal work.

"He's an excellent labor lawyer, and he has strong philosophical beliefs," the judge said. "When he represents a client, he always believes in the client's cause. This comes out in his appearances in court. There's a sincerity of purpose with which he practices law."

Miller, 86, grew up as a scrappy Jewish kid in Brooklyn, N.Y., who never shied away from a fight. Even as a high school student at Straubenmueller Textile High School in Manhattan in the early 1940s, he was a civil rights advocate. When race riots broke out in his school lunchroom, where the student body was evenly split into Jewish, Italian and African-American teens, he formed the Brotherhood Club - the first interracial club in the school. He went on to form the Interracial Youth Committee, an organization that spread to many schools throughout New York City.

Miller was popular with classmates but nearly always in trouble with school administrators for flaunting their authority, he said. 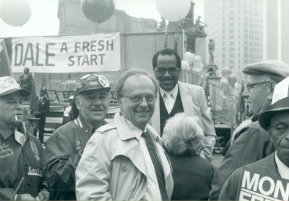 "When I was still in high school, I hung around with some young socialists who had been introduced to me by my uncle," wrote Miller, a West Bloomfield resident. "They belonged to the Socialist Youth Committee, which was the youth branch of the Workers Party, a democratic organization."

The Workers Party was founded in 1940 by members of the Socialist Workers Party who had split with the Trotskyists who defended the Soviet Union and recruited among workers and youth during the war years. In 1949, it renamed itself as the Independent Socialist League, and in 1958, the group disbanded.

After high school and during World War II, Miller joined the Merchant Marine and had a series of colorful adventures as a sailor. After the war, he took a job in a Long Island, N.Y., factory where his stepfather was a foreman.

"It was a non-union shop," Miller said. "I decided to try to change that fact."

Shortly thereafter, he was fired. He continued his union-organizing efforts anyway and decided he needed to go to college to have better employment options. The only way he could afford to do that was to join the U.S. Army so he could eventually use the GI Bill to finance his education.

"I enlisted in the Army in late 1946," Miller wrote. "My basic hostility to authority and the Army made it impossible for me to get all that I should have out of what otherwise could have been a positive experience."

More lively experiences ensued, until he was mustered out and made a beeline to Olivet College, a Michigan school he had heard about as a place where students were admitted based on interviews. There, he quickly organized a student strike over the firing of a popular professor. The effort failed, and Miller left Olivet and moved to Detroit with friends to get a job.

"Our plan was to earn money to go to school in Mexico," he wrote. "I got a job with the Hudson Motor Car Co."

After a while, with money earned, he went to Mexico to attend Mexico City College, where he did well academically, had 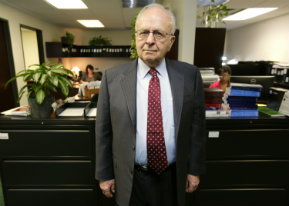 more adventures and wrote articles under a pseudonym for the weekly newspaper of the Workers Party. With a bachelor's degree in hand and the goal of being a labor lawyer, he sent applications to five American law schools.

"I was rejected by four," Miller said. "The only school that offered hope was Wayne State University (then Wayne University) in Detroit. Wayne didn't respond at all."

He arrived in Detroit on the last day of registration for law school.

"When I showed up at Wayne, they told me that they never heard of me," Miller said. "Apparently my application was not received. They said that they would accept me provisionally. I never heard anything more about it. Their apparent initial failure to reject me was a fluke. The whole thing was pure luck. If they had received my application, they would have rejected me like all the rest."

During his second year at Wayne Law, Miller learned why he was so roundly rejected.

"I was registering, and the person conducting the registration asked me to get my file for her," Miller said. "I got it and thumbed through it on my way back to her. I saw a letter from Dean Murray at Mexico City College."

The dean had written in Miller's transcript file that he was an excellent student.

"However, I feel it incumbent upon me to inform anyone who comes in contact with him that he is a troublemaker," the dean wrote.

Miller completed law school, and he's been an advocate of Wayne Law and Wayne State University ever since. His late wife, Edna, was a professor in the WSU School of Social Work. Two of his children, E. Powell Miller, who serves on Wayne Law's Board of Visitors, and Ann Miller are Wayne Law alumni (1985 and 1989, respectively), and his third child, Elizabeth Miller, earned a degree in theater at Wayne State.

After graduation in 1954, Miller tried to join the Michigan Bar Association.

"I was a member of a socialist, anti-communist organization that had been listed as subversive," Miller said. "It was later removed from the list. I disclosed this in applying for membership to the Bar. This became an issue when I appeared before the Character and Fitness Committee. I refused to renounce my prior political activity."

He was rejected, appealed and finally was admitted to the Bar.

Miller's career as a labor and civil rights attorney since then has been as colorful as his early years, and, like the boy he once was, the man has never shied from a fight. 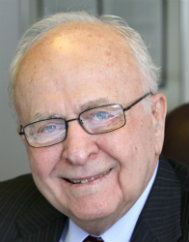 "In the fight for civil rights as attorney for the Detroit Branch NAACP, I was successful in protecting citizens from police abuse; caused the first agreement for goals and timetables at First Federal Savings and Loan Association resulting in the first integration of the downtown banking community; outlawed the notorious Poindexter Homeowner's Ordinance, which was designed to segregate the city of Detroit; and won many other fights and victories in the struggle for civil rights," Miller said.

He has served as general counsel for the Michigan AFL-CIO and as an attorney for and chairman of the Legal Redress Committee for the Detroit Branch of the NAACP. He's held a variety of positions in the Michigan Democratic Party, including chairman of the Wayne County Democratic Committee. He has written and lectured prolifically on labor issues, been listed in Best Lawyers in the United States and won many awards.

"I was a radical, but a special kind of radical," Miller said. "I never had any toleration for totalitarianism on the left or the right. I was a socialist, and now I'm a social Democrat."

He's been targeted over the years by people on both the left and right side of the political spectrum.

"I have enjoyed being in that position," Miller said. "My mother told me that a life is measured by whether or not it made a difference for others for having been. I hope that will be the verdict for my life."

Bruce Miller, a 1954 Wayne Law alumnus, in his Detroit office is surrounded by memorabilia from his long career in labor law.

During a Labor Day parade in 1984, Bruce Miller, center, is shown with Tom Turner, former president of the Metro AFL-CIO and secretary-treasurer of the state AFL-CIO, behind him, and with steelworkers who marched in the parade, as well.

Bruce Miller is a strong advocate of Wayne Law.