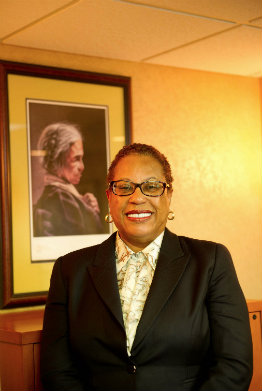 Take the ongoing class-action lawsuit, Lyda et al v City of Detroit, Detroit Water and Sewerage Department, over the residential water shutoffs in Detroit. The city in recent months began a mass shut-off campaign, cutting off water to thousands of residents whose accounts were delinquent. Jennings - a partner in the Detroit law firm of Edwards & Jennings PC - is one of the co-lead plaintiffs' attorneys in the suit, doing the work pro bono. A federal judge in September ruled that he found no constitutional right to water service. The case is being appealed to U.S. District Court, but already it has made a difference, Jennings said.

"By fighting the fight, by filing that lawsuit with due process and equal protection counts, there were substantial things that occurred, substantial improvements. They started giving a seven-day notice before shutting off someone's water. Before, a contractor was just sweeping through the neighborhoods and shutting off water with no notice. The commercial accounts were treated differently, and preferably. Because of international media attention to the case, the disparate treatment became known worldwide."

Or consider a case involving workplace discrimination. She's litigated plenty of those, too. Even if the case doesn't turn out right for the client who was discriminated against, Jennings said, the next time a similar situation arises, the employer likely won't repeat the alleged offense.

After decades of working as a civil rights attorney, she believes more than ever in advancing the cause of social justice through the law. And she still finds the work immensely rewarding.

"When you like something and you're good at it - really, that's the life," she said. "I would say civil rights litigation and human rights litigation is probably the most rewarding if your essence is to care. It's not for the weak of heart. But we do justice sometimes just by fighting the good fight. Sometimes the victory is in the fight itself because people have stood up and taken a position against discrimination. In the Detroit water case, 26 lawyers, all pro bono, came together to say, 'This is not right. I can't stand by and watch.' "

Jennings grew up in a "working poor" family, did well in high school and was offered an academic scholarship - created after the Detroit riots of 1967 - she credits to affirmative action.

"In the neighborhood I grew up in, what a young woman did was she got herself a husband who worked with a good job, and she had babies," Jennings said. "That was the world. I would never have thought about going to college."

But the scholarship changed that, and she earned a degree in social work from Michigan State University.

"I became a school social worker for the Detroit Board of Education," Jennings said. "It was my job to help troubled children. I went around to a lot of schools and found that I just couldn't do enough for the families. I was buying toothbrushes for kids and trying to make sure Mom got to work. And I said to myself that I should be able to do more than this."

One day in the early 1970s during the Watergate scandal, she saw Congresswoman Barbara Jordan, a noted African-American attorney and activist from Texas, on TV calling for the impeachment of President Nixon.

Jennings went to Wayne Law and became politically active there for civil rights, graduating in 1978. In 1977, Jennings and Wayne Law 1974 alumnus Carl R. Edwards, her future law partner and husband, also became co-coordinators of the Michigan Coalition to Overturn the Bakke Decision, a part of a national coalition supporting affirmative action.

After graduation, she worked for Philo Atkinson Darling Steinberg Harper and Edwards, becoming a partner after a few years.

In 1980, Jennings and Edwards gave leadership to the Coalition to Save the Detroit Human Rights Ordinance, which compelled employers doing business with the city to hire with provisions barring bias. Jennings and Edwards were honored with the Spirit of Detroit award for their successful pro bono defense of the ordinance, she said.

Jennings and Edwards seemingly haven't sat still since, fighting for the rights of Detroit residents in particular, and parenting six children at the same time, with the help of extended family at times.

In 1982, the couple established their own firm of Edwards & Jennings PC. Jennings is a founding member of Detroiters Working for Environmental Justice and, in the mid-1990s, was co-lead counsel, pro bono, with attorneys from the Sugar Law Center in a lawsuit regarding an incinerator in Flint.

"We were able to get a considerable consent judgment," Jennings said.

The agreement, called the first of its kind, prevented tons of lead particles from entering the atmosphere. Jennings was honored with the Flint NAACP Award for her work in the case.

A sexual harassment case in 2005, Elezovic v Fort Motor Company, is another fight Jennings is proud to have entered.

"We were able to establish that a supervisor can be held independently liable," she said.

Now, as a result of the landmark Michigan Supreme Court ruling in the case, a manager or supervisor must think about the possibility of being sued before he or she acts in a discriminatory manner, she said.

"We can change the law, too," Jennings said. "That is so rewarding - to have an impact on the law. You think you're doing something for somebody else, and you find out that it's making you into a better human being."

In 2002, Jennings and Edwards created and financially funded the Rosa and Raymond Parks Endowment Trust, a nonprofit to continue the work of Rosa Parks on behalf of children.

So others can continue the legacy of fighting the good fight.