Immigration attorney Farah Al-khersan knows on many levels what her clients go through in their quest to live in America.

The 2015 graduate of Wayne State University Law School is the daughter of Iraqi parents who brought her with her siblings to the United States in the 1990s in the hope of a "better future," she said.

"We were able to immigrate to New Zealand first and later to the United States," Al-khersan said. "My family went through the immigration process, which was long and arduous. It took us 15 years to obtain citizenship. As a result, I understand the process and sacrifices that many immigrants make in order to establish better, safer lives for themselves. I can personally relate to the struggles and experiences of immigrants, which allows me to better guide them through the legal process."

She was 5 years old when she left Iraq, and has never been able to return. 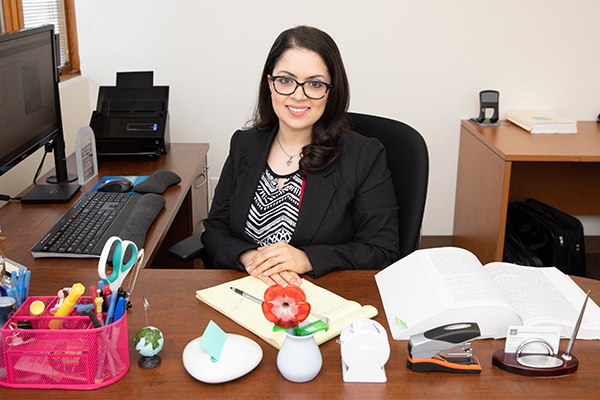 "The turmoil that Iraq is in and all the horrors that my extended family and others have had to suffer is heartbreaking, and to think that is what has become of my place of birth is very sad," she said.

"Many of the families that this clinic served were immigrants," Al-khersan said. "I assisted as an Arabic and Spanish interpreter at first, and later started helping with cases. I also worked with immigrants through Justice for Our Neighbors, an organization that provides legal services to immigrants who cannot afford private attorneys. These experiences were very rewarding and it was through this work that I realized my passion for working with immigrants. It was at this time that I decided to apply to law school."

When she learned about Wayne Law's Asylum and Immigration Clinic, and spoke to different professors at the school she decided it was the right place for her. She worked as a student attorney with the clinic for nearly two years.

"Family-based immigration centers on individuals who want to immigrate to the United States through qualified relatives," Al-khersan said. "I also represent individuals in immigration court as they are facing deportation. A lot of the work I do can take an emotional toll, because I am dealing with families facing separation in many cases, and individuals having to go back to countries where their lives may be in danger."

In January 2017, Al-khersan gained new insight into what it can be like to cross the U.S. border if you're not native-born.

She and her husband, Iraqi-born Osama Fadel, a pharmacist who is a legal resident of the United States and a Canadian citizen, were visiting his relatives in Sarnia, Ontario, when President Donald Trump signed an executive order banning entry to the United States by people from some Muslim-majority countries, including Iraq. The order created confusion at the border, where Customs and Border Protection agents had been given no rules or explanations of how to enforce the executive order.

When Al-khersan and her husband tried to return home after their visit, they were detained, based solely on their countries of birth. They were ordered out of their car, and their car keys were confiscated, as were their passports and Fadel's green card. The car was searched, and at one point agents told Al-khersan that she could leave, but her husband could not. She stayed with him.

After four hours, for no reason that was ever explained, the couple was allowed to go home.

Al-khersan went public with what had happened, and she was interviewed by media far and wide about her experience. She wanted people to know what effect the ban was having.

"I believe it is very important to speak out and provide accurate information about what is really happening throughout the country," she said. "There is so much misinformation out there about immigration law and policies."

She continues her work with passion to help others, and still believes in the promise of America.

"This country is my home, and it has always thrived on diversity," Al-khersan said. "I am proud to be an American citizen and will always believe the United States to be a country for people of all different backgrounds. Despite all the chaos and negativity surrounding the immigration debate, I am humbled by all the people who have chosen to stand up for equality and justice. The United States has been a country where my family has been able to grow and thrive, and I hope that it continues to be that way for other families."