Carlson will present her paper, "Lobbying Against the Odds," which is forthcoming in the Harvard Journal on Legislation. 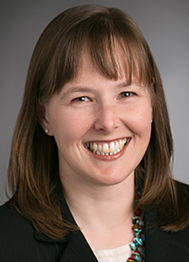 The forum promotes in-depth discussion about particular papers and more general reflections on broader methodological issues. It also seeks to foster a stronger sense of community among American legal scholars, particularly by strengthening ties between new and veteran professors. Through the process of blind selection, 12 to 20 junior scholars are selected annually by a jury of accomplished academics to present their work at the forum.

Carlson's paper is the first to present systematic, empirical data on American Indian lobbying from 1978 to 2012. It focuses on the question of why some groups use legislative strategies to achieve their goals, challenges the prevailing wisdom that politically powerless groups do not lobby, and demonstrates that groups sometimes lobby even when the odds are stacked against them. The paper combines political science and sociolegal approaches to studying advocacy to construct a nuanced and generally applicable framework for understanding how advocates develop strategies over time. It then uses this innovative approach to explain the 600 percent increase in American Indian lobbying that Carlson discovered in data she collected and analyzed on reported lobbying and expenditures by American Indians over a thirty year time period.