Alumnus talks 'professional experience of a lifetime' at Lear 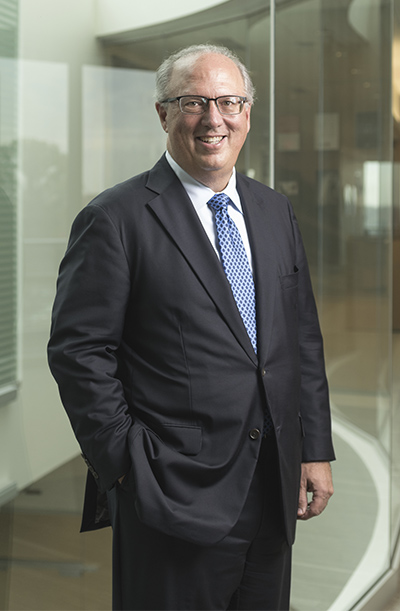 Terry Larkin, after 28 years as a partner and business attorney with Bodman PLC, was tapped 12 years ago to be general counsel for Lear Corp., a Fortune 500 firm.

The employment offer was unexpected - and "intriguing," he said.

Larkin, a 1979 graduate of Wayne State University Law School, went to work for Bodman soon after Commencement. Lear was a client of the firm, and Larkin was very familiar with Lear's legal matters. The Southfield-based company is a leading supplier of automotive seating and electrical components with approximately $21 billion in revenues.

In late 2007, Lear was looking for a new general counsel after the former person in the position was promoted to chief administrative officer.

"Dan Ninivaggi called me to ask my advice about the background and skills he should look for in a new general counsel," Larkin said. "After talking for about an hour, he said, 'I don't know why I didn't think of this before, but would you have any interest in the job?' I was very happy practicing law at the Bodman firm and had never entertained the thought of doing something different with my career. But the professional opportunity to do something very different from what I had been doing for almost three decades was intriguing.

"I had little experience in international law and I thought that serving as general counsel of Lear, with operations in 39 countries around the world, surely would expand my horizons. After a lot of careful thought and discussion with my wife, I decided to leave my comfort zone and try something new. It has been the professional experience of a lifetime."

Just a few years later, in 2009, Larkin met his greatest professional challenge with Lear, when the firm filed for Chapter 11 bankruptcy in the midst of the Great Recession, which hit the auto industry especially hard.

"While no one likes to file for bankruptcy protection, we at Lear were determined that we would make the best of a tough situation," he said. "Our CEO at the time tasked our CFO and me to lead the Lear team to negotiate a plan of reorganization that would protect the interests of as many stakeholders as possible.

"We are very proud that the plan of reorganization the Bankruptcy Court confirmed provided for the payment in full of all Lear's trade creditors, honored completely all of Lear's pension obligations, did not modify any of our collective bargaining contracts with our union partners, paid all our hourly and salaried employees in full and on time, did not impair any contracts with our customers or suppliers, and did not result in a disruption of the business of any of our customers. Moreover, the Lear team accomplished a complete Chapter 11 restructuring, from the date of filing the bankruptcy petition to the confirmation of the plan of reorganization, in just four months.

"We were told by our outside counsel and other bankruptcy advisors that the speed with which we completed the process is a record for a company of Lear's size."

Since then, Lear has gone to achieve record sales and earnings, he said.

Being a part of Lear's business decisions, which affect the lives of approximately 170,000 employees and their families, is a privilege, Larkin said.

"There is an incredible sense of responsibility to make the best decision possible, and a tremendous satisfaction in knowing that you have played some small part in the success of a great American company," he said.

Larkin always has been interested in the law and in business. He majored in finance at Michigan State University, and his favorite course at Wayne Law was business planning taught by Distinguished Professor Alan S. Schenk and the late Professor Stephen Schulman.

"They made the law come alive through their practical approach to teaching about business organizations," Larkin said. "I also really enjoyed my time spent on the Wayne Law Review, including serving as a note and comment editor during my third year of law school. The law review experience helped to hone my research and writing skills."

He advises law students aiming for careers as general counsel for a company to get a broad exposure to many areas of "substantive law."

"To be an effective general counsel, you need to have a general understanding of most every area of the law imaginable," Larkin said. "A general counsel's responsibilities typically run the gamut from overseeing litigation, labor and employment, securities, mergers and acquisitions, commercial contracts, real estate and general corporate matters to working on strategy for the business. You do not necessarily need to be an expert in each area of the law.

"Rather, a general counsel usually is more of a generalist who can spot issues and interact effectively with the subject matter experts, whether they are in-house staff attorneys or outside counsel. A general counsel must be able to translate what the experts are saying in a way that the business' leaders can use to inform their decision making."

Larkin also uses his talents as chairman of the board of Life Directions, which awarded him its 2018 Lifetime Achievement Award for his longtime support of the group.

"Life Directions is a nonprofit organization that has been working to reduce violence among the youth of Detroit for over 44 years," Larkin said. "They enlist successful high school students to mentor middle school students, not in academic studies, but in the social and emotional skills necessary to resolve conflicts without resorting to violence.

"This peer-to-peer approach has been very successful in reaching many at-risk youth in our community. I am honored to act currently as chairman of the board. Lear has been very supportive of my involvement with Life Directions both financially and in allowing me time to be involved personally."

Q: How did Wayne Law help to prepare you for your current career, aside from basic legal studies?

A: Law school teaches students to manage their time and be organized. However, I think the most important thing law school teaches students is how to listen to and learn from others. The practice of law is rarely a solitary pursuit. Rather, whether in a law firm or an in-house counsel role, lawyers need to be able to interact successfully with others - whether that's clients, colleagues, judges or adverse parties.

Careful listening skills help you understand another person's point of view. Being exposed to the kind of give and take of intellectual debate that occurs in law school prepares young attorneys for what the practice of law is all about.

Q: Why did you decide to become a lawyer, and why did you choose Wayne Law?

A: I decided to become a lawyer because at a youthful age I was impressed by the friends of my parents who were lawyers. They seemed to be bright, articulate and well-informed about current events. And they also appeared to enjoy their careers.

I chose Wayne Law because it had an excellent reputation and was affordable. I could live at home and commute to law school. That was a major factor because at the time, my parents were paying tuition, room and board for my four siblings and me at various stages of our undergraduate and graduate school studies.

Q: How did you get involved with Life Directions?

Q: What do you drive?

A: I currently drive a Cadillac XTS sedan, and, for fun on nice days, a two-seater Mercedes Benz convertible. Of course, both have Lear seats.

Q: What do you do in your spare time?

A: I do not have a lot of spare time but when I do, my favorite thing to do is spend time with my wife of 34 years and our three daughters. We enjoy boating and, although I have never been better than a bogey golfer, I greatly enjoy playing golf. I recently have taken up fishing, also.

Q: Where did you grow up and what were you like as a kid?

A: I was born in Detroit in 1954. When I was about 7 years old, my family moved to Buenos Aires, Argentina, for three years. My father worked for Ford Motor Co., and his foreign service assignment gave us the opportunity to experience living abroad. Upon our return to the states, we lived in New Jersey for five years. After that, we returned to metropolitan Detroit, living in the Orchard Lake area. I attended what was then Andover High School (now Bloomfield Hills High School).

I was a good student who benefitted greatly from parents who valued education. My childhood was idyllic. I am the second oldest of five children who are all close in age, and growing up we were, and are today, very close. I enjoyed sports of all kinds and played varsity football in high school. Through sports, I made a lot of good friends in high school. In fact, many of my closest friends today are friends I met in high school.

Q: Who are your role models and why?

A: My most significant role models are my parents. My father, who passed away in 2011, and my mother, who will turn 90 soon, were the most kind and loving parents a child could ever hope for. They provided a nurturing home life for my siblings and me, and simply asked in return that we try our best to use fully what talents we were blessed with and to be good people. The responsibilities we have as attorneys pale in comparison to those we undertake as a parent. I look to the example my parents set for me as the model for how I try to perform in my most significant role.