Captain Valonne Ehrhardt made two major life decisions that led to her career as a judge advocate in the U.S. Marine Corps.

The first of those major decisions was to study law.

“I was completing a master's in sports administration,” Ehrhardt said. “One of the classes (at the University of Nevada, Las Vegas) was sports law. During this class, I realized my mother was right. My mother, who is also an attorney, had been telling me my entire life that I should be a lawyer. The way you have to think, the analysis you have to do in studying the law, really appealed to me.”

Before taking that class, Ehrhardt had planned to be a college women's basketball coach. In fact, her undergraduate degree is in physical education. But that one course changed her goal. So with her degree in hand and the offer of a Damon J. Keith Scholarship from Wayne State University Law School, Ehrhardt packed up and moved from her home in Las Vegas to Detroit.

“The scholarship was a bonus, but what really drew me to Wayne was the personal touch associated with the school,” she said. “Dean Ericka Jackson (WSU director of undergraduate admissions and then Wayne Law's assistant dean of admissions and student affairs) personally called me to tell me that I had been awarded the scholarship well before I had decided which school to attend. The entire administrative office, including Dean (Felicia) Thomas (assistant dean of student engagement and culture and director of diversity initiatives), helped ensure I felt welcome and comfortable attending Wayne. 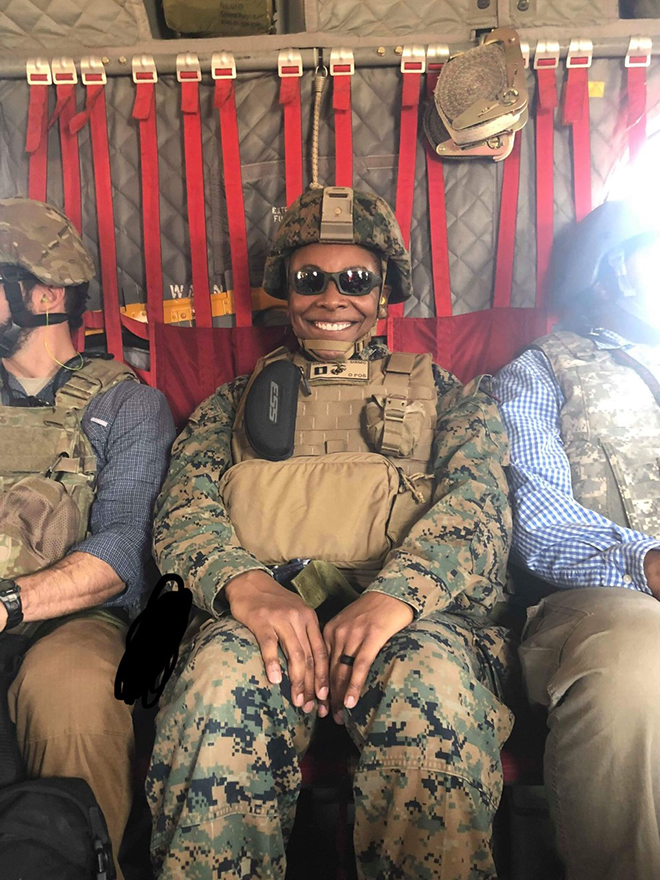 “Prior to my decision to attend, they coordinated to match me with a current student, Shakaye Peters, who had also attended a historically black university to talk to me about her experiences.”

As a newcomer to Wayne Law and to the Detroit area, Ehrhardt didn't know anyone at first.

“I visited Dean Thomas often and she made sure I felt right at home,” Ehrhardt said. “I think she loves and respects every one of the students that walk through the doors of Wayne Law. She takes a special interest in everyone and is so supportive.”

The second of Ehrhardt's major life decisions was to join the Marine Corps.

Jaysura, who like Ehrhardt is a 2014 Wayne Law graduate, also was in her first year of law school when the two women met. Jaysura, however, was already a Marine.

“When I met her, my first thought was, 'Wait! There are women in the Marine Corps?'” Ehrhardt said. “After I got over the initial surprise, we talked a few times about the sort of thing she did in the Marine Corps, and what it means to be a Marine. As if the (Marine Corps recruiter) could read my mind, within the next few months, I received an email that was sent to the entire Wayne Law student body offering the opportunity to join the Marine Corps and serve as a judge advocate.”

Ehrhardt researched other branches of the military, and decided the Marine Corps was the right place for her.

“I chose the Marine Corps because you are a Marine first,” she said. “Regardless of the fact that you are a lawyer, every Marine officer – pilots, logistics officers, military police, lawyers, everyone – attends the basic school where they are trained to be a rifle platoon commander. I liked that I was required to do all of the entry-level training that every Marine officer had to complete. I didn't want any special treatment just because I was going to be an attorney. Also, the Marine Corps is the toughest branch and the hardest training. I wanted to earn something that I could be proud of.”

Even though Ehrhardt was contracted to the Marine Corps by the time she was in her second year at Wayne Law, she was able to get a summer associate position.

“The Wayne Law staff helped me, and I was able to work at Miller Canfield during my 2L summer,” she said. “That really meant a lot to me and allowed me to stay afloat financially. I was concerned that no one would hire me for a summer position since I was already committed after graduation.”

Ehrhardt graduated from Wayne Law and began her life in earnest as a Marine. Her law school friend Jaysura, now section head of the Marine Corps officer promotions branch, made a special trip to administer Ehrhardt's oath of office and her promotion to captain in person.

Since that time a few years ago, Ehrhardt has experienced a lot.

“A judge advocate in the Marine Corps can hold many different jobs,” Ehrhardt said. “During my time, I've been a civil law attorney, an operational law attorney and an appellate defense attorney. In the future, I could hold many different legal billets such as victim's legal counsel, legal assistance attorney, staff judge advocate and many more. I can also hold Marine specific billets like company commander or company executive officer, or I could get selected for recruiting duty.

“As a defense attorney, I very quickly got to be first chair on felony-level trials. It's an experience that I'm not sure an attorney would get in any other job. I also got to go to Afghanistan and advise very senior ranking officers on operational law. In my current job as an appellate defense attorney, I will have the opportunity to argue before the Court of Appeals for the Armed Forces – a federal circuit court.”

Afghanistan hasn't been her only travel opportunity. In only five years of active duty, Ehrhardt has traveled to dozens of American cities, including San Diego, New Orleans, Boston, New York and Houston, and has been overseas to Germany and Kuwait, as well.

“Joining the Marines was one of the best decisions I've ever made,” she said.

Q: What are some of your most memorable experiences from your time in law school?

A: I loved my time at Wayne Law. I'd have to say meeting (the late) U.S. Circuit Judge Damon J. Keith (Wayne Law class of 1956, master of laws) was amazing. I also loved my job as a LexisNexis student representative under (former Lexis account executive) Liz Arnkoff (Wayne Law class of 2007). I got to participate in national mock trial with some of the best coaches, including Rachel Hyerim (Sisco, class of 2011), Paul O'Neill (class of 1997), Greg Wix and Larry Mann, (former associate director of professional skills, class of 1980).

I had great, memorable experiences, but the best part about Wayne Law is the people, definitely. I met some of my best friends at Wayne Law. The staff is amazing, as well. It's truly a family, and I'm so grateful.

Q: What advice can you offer beginning law students or others who might be interested in combining a legal education with a military career?

A: Do it! There's no experience like it. There are prerequisites – you need to be physically fit and meet all of the requirements of the specific service. But if it's something you're interested in, explore the option. Don't decide it's too hard or not worth it until you've done the research. The best way to know what you're getting into is to talk to someone who's done it or is doing it. And, as is the case with any job, be mature. Make sure you don't do anything to foreclose the option before you have it – by that I mean misconduct.

Q: Describe yourself at age 12, please.

A: I grew up in Las Vegas. At 12, I was attending a performing arts middle school where I played the slide trombone and danced. I was also beginning to get serious about basketball and track. This was around the time I transitioned from performing arts as extracurricular activities to sports

I gave my parents lots of trouble as a child because I loved to take the easy way out. I was all about instant gratification, and didn't have the foresight to play the long game. I can tell you for certain that if you had asked my parents at that time if I'd ever join the military, let along the Marine Corps, they'd have laughed at the thought. Fortunately for me, my parents never gave up and continued to invest in me and my future.

Q: What do you like to do in your spare time?

A: I really don't have much spare time, but when I do, I love spending time with my wife. We love to watch movies and shows and to try out new restaurants. We also do quite a bit of traveling to see friends and family.

Q: What is something most people don't know about you, but should?

A: I don't know if this is something anyone particularly should know, but most people don't know that I was captain and earned two first-team all-conference honors for my college cross-country team.

Q: Who are some of your role models and why?

A: Michelle Obama, Serena Williams, the Hon. – and notorious – Ruth Bader Ginsburg, Brig. Gen. Lorna Mahlock, the first black woman to be promoted to general in the Marine Corps. All of these women are pioneers and trailblazers. It's obvious from their success that they have a tremendous work ethic and extreme discipline. They have achieved many “firsts” and have continued to excel.