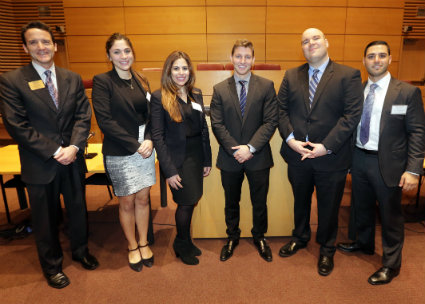 A Wayne State University Law School transactional law team, for the fourth year in a row, won first place in drafting at a regional competition of the National Transactional LawMeet competition.

The team of third-year students Lena Pantely of Bloomfield Hills and Haley Jonna of Keego Harbor took first place in drafting, representing the buyer, and fourth place overall (drafting and negotiations) during the Feb. 26 contest hosted by Northwestern University in Evanston, Ill. Wayne Law's team of second-year students Gabe Appel of Huntington Woods and Matthew Coffee-Tavi of Shelby Township competed at the University of Missouri-Kansas City School of Law and took home third place in drafting and fourth place overall. The teams were aided by second-year student Amy Huang of Farmington Hills, who assisted with the drafting and by conducting practice negotiation rounds.

Justin Hanna of West Bloomfield, who recently completed his law degree and was part of the 2014 team that won its regional competition, served as chairman for this year's teams, which are advised by Assistant Professor Eric Zacks of Huntington Woods.

Said Hanna: "This process provides a close look at the real-world deal process and helps equip the participants with the practical skills needed to be successful in practice. We are very proud of our teams and all that they have accomplished."

For the competition, the teams represented a buyer in a complicated sale/joint venture transaction, which involved drafting particular sections of a purchase agreement, marking up the opposition counsel's draft and conducting live negotiations with opposing counsel. The teams spend hundreds of hours working on their agreements, participating in client conference calls and preparing for the live negotiations.

"Wayne Law is doing an excellent job at helping their students get more clinical and practical experience," Appel said. "This was a great practical learning opportunity. We had fun competing against other top law schools, and we'll beat them all next year."

The transactional law teams are part of Wayne Law's Program for Entrepreneurship and Business Law. Team members were selected based on their finish in a Wayne Law transactional competition held in the fall in which 26 students participated.