DETROIT - The Journal of Law in Society at Wayne State University Law School marked the 50th anniversary of the Detroit rebellion with a symposium on "Why Detroit Rebelled: The Intersection of Racism and Social Control in the City."

Students, scholars, historians and members of the community gathered for the Nov. 17 event at the law school, which featured panel discussions on the following topics:

Delivering the keynote address was Dr. Scott Kurashige of the University of Washington Bothell School of Interdisciplinary Arts and Sciences. He discussed his recently published book, "The Fifty-Year Rebellion: How the U.S. Political Crisis Began in Detroit." 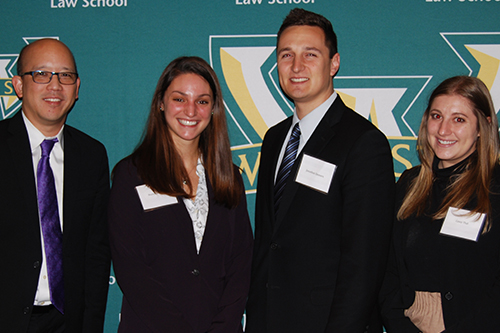 At The Journal of Law in Society's 2017 symposium, keynote speaker Dr. Scott Kurashige (from left), poses for a photo with student organizers Madeline Sinkovich, Jonathan Demers and Casey Thal.