Charles Hayden IV wasn't in Texas when Hurricane Harvey hit, but he played a major role in creating a charity to help some 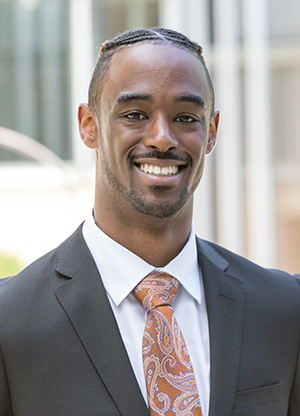 A second-year student at Wayne State University Law School, Hayden is a legal extern working with senior management at TriMas in Bloomfield Hills, a worldwide industrial manufacturer of engineered products.

"â€¦Charles Hayden was absolutely vital in setting up a major charity effort to support a subsidiary in Houston in the wake of Hurricane Harvey. Charles single-handedly spearheaded setting up the collection mechanism, working closely with our treasury team and senior leadershipâ€¦.It's great to see Wayne Law producing such high-caliber students who are ready to hit the ground running."

An Auburn Hills resident, Hayden himself is much more modest about his efforts, which raised more than $30,000 to help employees of Houston-based Lamons, a TriMas subsidiary. The money went for home and auto repairs and for the purchase of needed furniture, clothing and children's items.

In the wake of the hurricane, Hodges came to the Wayne Law extern and asked him to research different charity websites that could help raise money for the affected employees.

"After doing research, I suggested GoFundMe would be the best option," Hayden said.

"Before I could set up the GoFundMe account, I needed to connect it to the TriMas Foundation, a non-profit corporation," Hayden said. "In doing so, I had to write a director's resolution with recitals connecting the funds to the GoFundMe account. After that, I started to set up the account. The pages had to pass through various executives from the president of TriMas to the head general counsel."

Once approval was given, TriMas sent a mass email to its employees encouraging them to donate via the website Hayden set up.

"Honestly, it was an honor to help those in need," Hayden said. "I wish I could do more. And I can't take credit for this. I was just following the lead of Mr. Hodges. He has been a great mentor to me these past couple of months."

Charity work is not new to the Wayne Law student, an only child who, with his parents, adopted a family in need each holiday season as he was growing up, and today makes a point of extending a helping hand whenever he's able.

"I think I get that from my late nana," Hayden said. "She was one to help everyone, no matter who they were. One of my goals is to start a charity in her name - The Minervia Heglar Foundation, or something along those lines."

Hayden was an extroverted, active child, eager to learn and in love with sports.

"I had a basketball with me 98 percent of the time," he said. "Even today, I keep a basketball and shoes in my car."

He has always loved business, as well, and as a sixth-grader, started a car-washing venture in his family's driveway. All through high school and college, he worked at various jobs and played basketball. Hayden earned a degree in business administration in sports management at Adrian College before choosing to attend Wayne Law, where he is event coordinator and treasurer for the Sports and Entertainment Law Society, serves on the Student Board of Governors and is active in the Black Law Student Association and the Wolverine Bar.

Going into law seemed like just the right step for him after earning his bachelor's degree.

"I wanted to combine my love for sports, my eagerness to learn and what I'd like to think is my business-savvy mind," Hayden said. "I wanted to go to a law school that felt like home and would set me up to succeed in the near future. During the summer prior to my first year, I talked to multiple alumni, and what stood out to me was that each one I came across talked as if we were family. There was strong pride that came with being a Wayne Law alum."

The school's location in the heart of Detroit also played a role in his choice of Wayne Law.

"I liked the direction that Detroit was going in," Hayden said. "I wanted to be a part of the rejuvenation of the city. I believe Detroit has so much potential, and I cannot wait to see where it goes from here."

Where will Hayden go from here?

"Honestly, my dream goal is to be on the general counsel for an NBA team," he said.