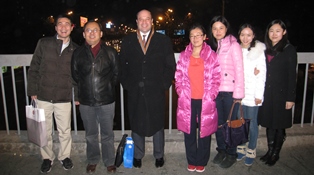 Dubinsky, director of graduate studies at Wayne Law, said his trip was "very productive" and a wonderful experience, as well.

A growing number of students from China are expected to study law in the United States, and Wayne Law is well poised with several master of laws degrees to offer them. Partnerships have been formed by Wayne Law with Beijing Normal University and the China University of Political Science and Law for that purpose, thanks to Dubinsky's visit and a trip to China in June by Wayne Law Interim Dean Jocelyn Benson.

"We signed a memorandum of understanding with Beijing Normal and held a signing ceremony," Dubinsky said of his trip. "It's a framework by which students will enroll in the LL.M. program at Wayne State."

A faculty exchange also is in the works.

"The Chinese law schools that I visited are highly interested in having one or more Wayne Law faculty members teach courses there," Dubinsky said. "It's also very possible that some of the junior faculty there will be coming here and perhaps co-teaching courses with Wayne faculty."

Over the summer, Dubinsky organized a program that brought groups of students from several Chinese universities to Wayne Law to spark their interest in the master of laws program.

American students at Wayne Law will benefit greatly from association with Chinese and other foreign law students and faculty members, Dubinsky said, and all will benefit by understanding more about the ever-increasing complexity of transnational legal practice.

"Wayne's new master's degree program in U.S. law is designed for outstanding law students from other countries," Benson said. "This is an attractive program for students who seek to practice law in the United States, transnational law in their home countries, who may work in government ministries involved in negotiations with the United States, or who intend to work on advanced degrees and careers as scholars."

In the burgeoning field of international business law and arbitration, in particular, opportunities are blooming for students well-versed in Chinese and Western law, Dubinsky said.

He found Chinese university students very interested in the transformations taking place in the American legal system as it confronts global terrorism and in the National Security Agency's activities exposed by former CIA employee Edward Snowden. This subject was the focus of Dubinsky's Dec. 5 public lecture at Shandong University.

"There are so many legal layers to the problem and the issue, and global business competition brings many dimensions to the conversation," Dubinsky said.

Midway through a question-and-answer session after his well-attended lecture at Shandong University, he found himself thinking, "Gee, these students know as much about the NSA surveillance program as the students in my National Security Law seminar at Wayne," he said.

Part of the professor's recent trip was coordinated with WSU's College of Liberal Arts and Sciences and the Confucius Institute at Wayne State.

Dubinsky came to Wayne Law in 2005 after teaching at Yale Law School and Georgetown University Law Center. Before his career as a scholar, he was an associate with Wilmer Cutler & Pickering. He is a graduate of Yale University, Harvard Law School and the Universiteit Katholieke of Leuven, Belgium.

Wayne State University Law School's Paul Dubinsky, third from left, poses for a photo Dec. 5 at the end of one of his university visits in China. With him is Professor Xiang Gao, second from left, director of the College of Comparative Law at the China University of Political Science and Law in Beijing, as well as several current doctoral students and recent graduates of that university.