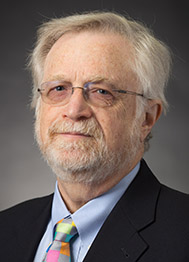 Lawyer Legacy Award from the State Bar of Michigan.

The award was presented last month at the State Bar of Michigan's NEXT Conference.

This award is given periodically to an educator from a Michigan law school whose influence on lawyers has elevated the quality of legal practice in Michigan. It is named after John W. Reed, former Wayne Law dean and University of Michigan Law School professor who, over the course of his decades-long career, earned a reputation as a pre-eminent scholar and teacher.

"I am honored to be selected for the John W. Reed Lawyer Legacy Award," said Schenk. "John represents the highest in lawyer ethics and integrity, and receiving this award is indeed a privilege."

In 2016, Schenk celebrated his fiftieth anniversary at Wayne Law, making him the longest-serving faculty member in the school's history. He has devoted his academic career to tax law, and he is regarded internationally as an expert on value added taxation. He is currently writing a history of Wayne State University Law School.

Schenk teaches Federal Income Tax, Business Planning, Accounting for Lawyers and Consumption-Based Taxes. He taught or co-taught value added taxation at Harvard Law School's International Tax Program, at the University of Michigan Law School, Duke University, and in Australia, South Africa, Canada and Taiwan. Schenk is the recipient of numerous awards including the distinguished faculty award from the Michigan Association of Governing Boards of State Universities; WSU President's Award for Excellence in Teaching; and the Wayne Law Professor of the Year Award. He also is a two-time winner of Wayne Law's Donald H. Gordon Award for Excellence in Teaching.

Schenk earned his LL.M in Taxation from New York University and his LL.B. and bachelor's degrees from the University of Illinois.