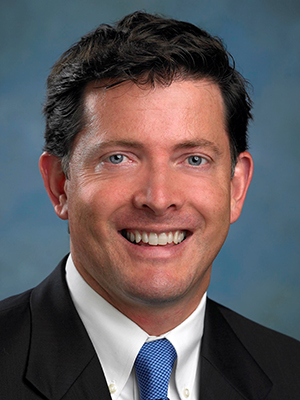 DETROIT – James H. (Jim) Townsend, a former member of the Michigan legislature and former legislative director in the office of U.S. Rep. Nita M. Lowey, has been appointed director of the Levin Center at Wayne State University Law School.

Townsend replaces Wayne Law Professor Robert M. Ackerman, who, in addition to serving as a member of the Law School’s full-time faculty, also has served as director of the Center since 2017. Ackerman will continue to serve on the Law School faculty, and will work closely with Townsend during the transition.

“In the few short years since its inception, the Levin Center has quickly become the leading academic center on the art and practice of legislative oversight, with a national and international reach,” said Wayne Law Dean Richard A. Bierschbach. “Jim’s experience in government and the non-profit sector position him perfectly to expand the Center’s impactful work, and I am excited to partner with him to do so. I’m also grateful to Professor Robert Ackerman for his years of dedication to the Center’s mission.”

Townsend previously was an attorney in the Detroit office of Butzel Long and a member of its Corporate and Real Estate Practice Group. Prior to joining the firm, he represented the 26th District in the Michigan House of Representatives and served as minority vice chair of the House Committee on Oversight and Ethics.

He serves on the Michigan Economic Development Corporation’s advisory council of the Redevelopment Ready Communities (RRC) program. In addition to his service for Lowey, he also worked for U.S. Sen. Frank R. Lautenberg. Townsend’s non-profit experience includes founding and directing the Michigan Suburbs Alliance (now known as Metro Matters), leading economic development at the Detroit Metro Convention and Visitors Bureau, and spearheading the team of development industry experts, city officials and other stakeholders that established the RRC program in 2004. Townsend has also worked in the business sector serving as a brand manager at Ford Motor Company.

“I am delighted to have Jim Townsend join the Levin Center as our first full-time director,” said former U.S. Sen. Carl Levin, chair of the Levin Center at Wayne Law. “He brings a wealth of experience to the position and is deeply committed to our state and the Detroit metropolitan area. I look forward to working with Jim to continue the growth of the Levin Center as a nationally recognized and locally grounded organization that promotes bipartisan oversight, fact-based investigations, and civil discourse.”

Launched in March 2015, the Levin Center at Wayne Law educates future attorneys, business leaders, legislators and public servants on their role overseeing public and private institutions and using oversight as an instrument of change. The Center is named in honor of former U.S. Sen. Carl Levin, Michigan’s longest-serving U.S. senator, who retired at the beginning of 2015 after 36 years in the Senate. Levin serves as chair of the Levin Center and on the Law School’s faculty as distinguished legislator in residence. Learn more: law.wayne.edu/levincenter