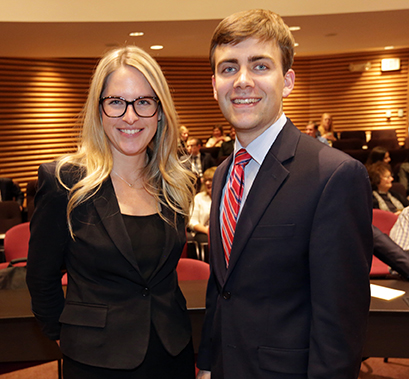 Duffy and Roelans for the defense competed against Rachel McDuffie of Belleville and Courtney Rosenau of Northville, the finalist team for the plaintiff.

The final trial was the culmination of months of work from the participants. Before the semester started, Mock Trial members participated in a three-day, intensive workshop to learn the rules of evidence and trial techniques. Members participated in two additional days of workshops this semester to hone their trial skills.

The competition for fall semester began in September with 14 teams. Each team competed in two trials, one as the prosecution and one as the defense. The field then was narrowed to four teams, which competed in the semifinal round. Finalists were determined by aggregate points over the course of the semester.

In the civil case for this semester's competition, the plaintiff filed a suit for negligence against the defendant for allegedly failing to maintain runway lights on a private landing strip. This alleged failure resulted in the untimely demise of the decedent plaintiff.

Other members of Mock Trial served as the jury, and Wayne Law students served as witnesses.