Attorney Valerie Newman, renowned as a champion for the rights of the wrongly accused, has a new job as head of the Conviction Integrity Unit with the Wayne County Prosecutor's Office.

After 23 years with the State Appellate Defender Office, Newman, a 1992 alumna of Wayne State University Law School, might be seen as switching sides to work with prosecutors.

But that's absolutely not the case, she said. 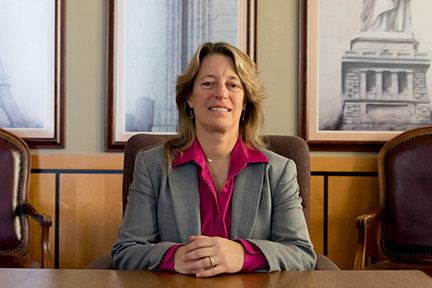 "My passion for justice is a central driving force for me and why I became a lawyer," Newman said. "I have long advocated for changes in the criminal justice system, and worked hand-in-hand with prosecutors, law enforcement, judges and other stakeholders to effect positive changes that reduce wrongful convictions and improve the process. I come into this new role as someone who has built a career advocating for a fair and just system, and this position is a continuation of that work."

Her career thus far has earned her numerous honors. She has twice argued before the U.S. Supreme Court, including her 2011 successful effort in Lafler v. Cooper, considered a landmark case regarding a defendant's right to effective counsel. Another high profile case she handled recently was that of Davonte Sanford, who, largely thanks to her efforts, was released from prison in 2016 after serving almost nine years. He was 14 when he was convicted in 2007, and two weeks after he was imprisoned, another man confessed to the four murders for which Sanford was convicted.

Newman's new job with the prosecutor's office began in January, and details of how it will function have recently been determined. The county's Conviction Integrity Unit is one of dozens such units being created across the nation reporting varying degrees of success. The Wayne County unit is expected to have two full-time lawyers, a "project consultant" lawyer, one full time investigator and one "project consultant investigator," with Newman - recruited for the position by Prosecutor Kym Worthy - in charge.

Newman, a Pleasant Ridge resident with a bachelor's degree from the University of Michigan in organizational behavior studies, began her law school experience thinking of a career in environmental law. But by her second year in school, she had set her sights on criminal defense.

"The summer of my second year, I took the opportunity to work at the public defender's office in New York and became intrigued with criminal law and the defense side of things," she said. "After that summer, I decided to be a criminal defense trial lawyer. I opted to start my career at the State Appellate Defender Office because I thought that appellate work would be a good way to gain a firm grasp on the law before heading into the trial court.

"As an added bonus, Michigan is one of the few states with a unified appellate system, which gave me the opportunity to litigate in the trial courts. I quickly discovered that being an appellate lawyer provided tremendous opportunity to do both trial and appellate level work."

Newman urges law students to remember that every move they make in any form of legal practice affects people deeply, and to find and pursue an aspect of the law that ignites their passion - no matter what that aspect might be.

"Justice does not happen on its own," she said. "It is people who make justice happen, and we need people at every stage of the process to make the decision to do justice."

Q: Your commitment to advancing women often has been noted. Were there experiences in your career that served to strengthen that commitment?

A: Women have not and are still not afforded the same opportunities as men. I have devoted my personal resources to encouraging and mentoring all new lawyers, but especially women. I have experienced numerous instances of sexism and discrimination. One of the first as a lawyer was where the judge called the attorneys into chambers and showed great favoritism to the male lawyer while treating me with little respect. This attitude persisted throughout the proceedings and included some off-color jokes.

We eventually settled the case, but the judge was openly disrespectful toward me and I don't think he realized the extent and reach of his actions. The sexism has continued throughout my career - in the workplace, in the courts, in every aspect - and how one handles it is a personal response. The one thing all women should have is a mentor. It is invaluable to have someone who has experienced similar situations and can advise on how to handle such situations.

Q: Who are your role models or inspirations and why?

A: My role models are an ever expanding circle of people. Two of the living people I greatly admire are Bryan Stevenson (founder and executive director of the Equal Justice Initiative) and Supreme Court Justice Ruth Bader Ginsburg. Both are inspirations in their chosen field as well as having appeal to those outside the legal realm. They have made and continue to make an impact on people's lives in ways large and small, yet are people one can relate to on a personal level.

Q: How do you keep from burning out?

A: I focus on maintaining a healthy lifestyle and having outside interests. Activities like volunteering at a nonprofit help to ground me. I try not to lose sight of how fortunate I am to have the opportunity to impact people on an individual level, as well as improve things on a global level.

A: I chose to attend law school because I wanted additional education and to be in a field where my degree gave me various ways to utilize it. I chose Wayne as I wanted to be part of an urban downtown campus and knew I would be making my home in the metro Detroit area. Wayne afforded, and continues to afford, a top-notch education without having to accrue enormous debt.

Q: What law school experiences stand out as most memorable to you?

A: The most memorable experiences for me were the moot court program, my clinical experience working with a State Appellate Defender Office lawyer in the Criminal Appellate Practice class, and the student groups. I was involved in a number of groups that afforded me the opportunity to expand my perspective and build personal relationships.

Q: Where did you grow up and what sort of kid were you?

A: I grew up in Oak Park. I was the quiet, tow-the-line kid. I liked working in the garden and being outside. I was always willing to help others and liked being busy and productive. Both my parents were giving, but in very different ways.

Q: What do you do in your spare time?

A: I spend time with my spouse, dogs and extended family. I like to read, garden and kayak among other activities.