Wayne Law alumna is a voice for refugee children

Attorney Laura Barrera is on the front lines of America's immigration crisis every day.

A 2016 graduate of Wayne State University Law School, Barrera represents unaccompanied refugee children - nearly all of whom are Central American victims of trauma who are seeking asylum - in deportation proceedings before the Immigration Court and before the U.S. Citizenship and Immigration Services agency of the Department of Homeland Security.

Without her and other pro bono attorneys like her, the children, some as young as 4 years old, face Homeland Security lawyers alone without legal representation.

Barrera works for the University of Nevada-Las Vegas William S. Boyd School of Law Immigration Clinic. She began her work there right out of law school in October 2016 as an Equal Justice Works AmeriCorps fellow. The Trump administration recently canceled the funding for the AmeriCorps initiative that provided attorneys for the unaccompanied minors, but a Las Vegas attorney stepped up with a donation to continue the program at UNLV, now known as the Edward M. Bernstein & Associates Children's Rights Program. 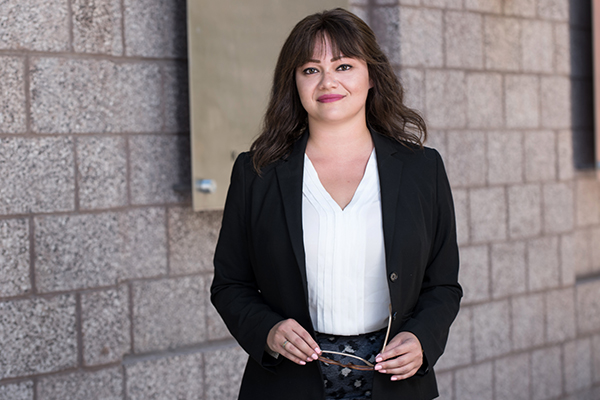 Barrera, who is proficient in Spanish and French, is the first Bernstein Fellow. Besides representing children seeking asylum, she also does community outreach and helps teach and supervise law students in the clinic. She is outspoken in the media and to anyone who will listen in support of her young clients.

"We need to make sure that each one of them has an attorney in court," she said. "A child cannot access justice in immigration court without an attorney. Immigration is an extremely complex area of law, and it's just totally unreasonable to expect children to be able to defend themselves in court on their own. Their opposing counsel will be an attorney for the Immigration and Customs Enforcement (ICE) Office of Chief Counsel.

"The policy now is that kids can have an attorney, but one will not be appointed for them. This means that unless they can afford to pay an attorney - they can't because they are children - or they can get in with a free legal service provider, they will be representing themselves. This is an impossible task, especially now, because the law seems to be changing almost weekly. How could a child even keep up with all the new policies and case law that will affect their case? And it doesn't matter how old the child is - whether 4 or 18 - they won't get an attorney unless they can pay for one or find a free one."

Despite what some people seem to think, these unaccompanied children seeking refuge are not drug cartel members or smugglers, she said.

"On an almost daily basis, I am talking with kids who have been raped, have had guns put to their heads, had parents or close family murdered or kidnapped," Barrera said. "Most of this violence is perpetrated by gangs, and the kids that come here are kids who refuse to join the gang or comply with its demands. When you refuse the gang, they kill you. Instead of waiting to be killed, the kids flee. Sometimes it's in the middle of the night with only the clothes on their backs.

"We should be offering them protection instead of subjecting them to this sham justice. There are a lot of law and policy changes that need to be made to adequately protect these kids, but providing them with attorneys would be a huge and important first step."

Barrera knew right away she was passionate about public interest law. During her first two years of law school, she volunteered as an interpreter in Wayne Law's Asylum and Immigration Law Clinic, and in her third year, she worked in the clinic as a student attorney. During the summer between her second and third year, she worked on refugee issues for Human Rights First in Washington, D.C., as a recipient of a Wayne Law International Public Interest Law Fellowship.

Her work now can be emotionally taxing.

"I am really inspired by my kids, and when I'm tired or sick of researching and writing and thinking about persecution and the horrible things that people do to each other, I think about everything my clients have been through and I feel lucky to be a small part of hopefully overcoming their painful experiences," Barrera said.