For 25 days, public interest attorney Lisa Walinske camped out on the side of a busy road in Detroit to raise money so she could help more needy clients.

In the process, she garnered national attention, starting with a Dec. 7 Detroit Free Press article about her effort.

She fashioned a ramshackle hut out of scrap wood covered in tarps to keep out the rain and snow in a parking lot next to East Jefferson Avenue at Chalmers, a neighborhood close to her law firm's modest offices.

She had hand-painted signs emblazoned on her makeshift shack touting social justice slogans and her GoFundMe account, which to date has earned $22,735.

"The money is going to fund our community education and empowerment initiatives," Walinske said. "We plan to hold seminars ranging in topics from your rights with the police and in the courts to how to apply for energy and rain tax credits and incentives. The funding is also expanding our ability to take cases directly for those who cannot pay anything close to market rates for legal services."

Walinske stayed outside from mid-November to mid-December until she had her self-imposed goal of $18,500 in donations, spending each night in a sleeping bag with her big dog nearby. It was cold and she had many doubts, but she persevered. 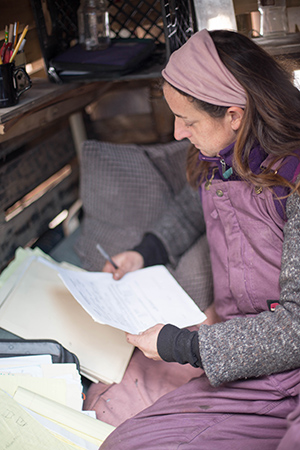 "I learned far more than I bargained for out on Jefferson on those cold nights alone in my shack," she said. "I've lived off East Jefferson in Detroit for almost 20 years, but I typically sleep, work and live indoors. On the streets in the shack, I was exposed to the elements and a steady stream of people of all kinds. Some people brought gifts, donations, snacks, supplies. Some people came with their pain and shared stories of deep wounds of injustice."

Some of those people are now clients of the firm, thanks to the donations.

Kathleen Garbacz of Hamtramck, a law partner at ReDetroit and a 2015 alumna of Wayne Law, was a frequent visitor to Walinske's campsite. Garbacz said she was initially a little nervous about Walinske's plan to live outside like someone homeless.

"We knew we needed to raise funds, but the idea of camping out in the cold on Jefferson Avenue - well, that was completely Lisa's idea, " Garbacz said. "She was convinced we could make our fundraising goal if she just stayed put in her tent inside a circle she drew on the ground. Admittedly, I was not as confident as Lisa that the plan would succeed.

"The morning the story hit the Free Press, just in the time it took me to drink my coffee, hundreds of dollars had poured in. I was shocked and humbled by the donations, and very happy to be proven wrong!"

Garbacz, who earned a bachelor's degree from Western Michigan University, joined ReDetroit in 2015.

"I was looking for a position that would allow me to continue doing public interest law and without the restrictions that often come with more traditional funding for legal services," she said. "Since joining, I've had the opportunity to work on small cases that make a huge difference in our clients' lives, as well as impact litigation."

The final donation that brought Walinske to her $18,500 goal and back inside again came from Wayne County Chief Circuit Judge Robert Colombo Jr., who read her story in the newspaper, quietly handed her a check in person, and said he admired her for her cause and for her work.

"I started the Campout for Justice Detroit with bold determination and deep faith," Walinske said. "I was beyond frustrated that at my own law center, I had found myself without the resources needed to the do the job required for my clients. And there were so many clients whose cases we just couldn't afford to take. The absolute worst feeling is to see injustice, know it, feel it, and realize and accept that there may be nothing in this world that can be done about it.

"But just because I practice radical acceptance of life on life's terms doesn't mean I don't have the obligation or privilege to act. In fact, I'm called to action as a lawyer and an advocate."

Walinske earned her bachelor's degree from Taylor University and attended the National Outdoor Leadership School. She recently earned a master of laws degree in environmental law from Vermont Law School. She even tried private practice for a while.

"I was a partner at a small boutique law firm after I thought I had quit being a young idealist," she said. "In private practice, I quickly grew weary of the billable hour and lacked passion for the work that I was doing."

She also worked for legal services agencies and for the city of Detroit before founding ReDetroit a few years ago.

"I founded the law center because I wholeheartedly believe in equal access to justice," Walinske said. "I think it is a tragedy of our justice systems that there are so many who stand on the outside looking in, not understanding what is happening to them or a loved one. And even when they do understand, they simply aren't yet empowered to utilize the tool of legal knowledge for their own benefit.

"I believe in standing up for justice, which sometimes means upsetting the status quo. My goal in starting the center was never to take Legal Service Corp. funds (which come with restrictions), and to bring the law back to the people - all people."