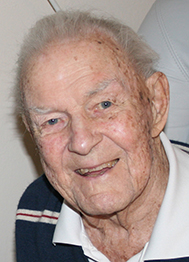 Former Wayne State University Law School dean, Judge Charles Joiner, passed away at his home in Naples, Florida, on Friday, March 10, at the age of 101.

Joiner was dean of Wayne Law from 1968 to 1972 and a U.S. district court judge for the Eastern District of Michigan from 1972 to 1984. In 2016, he was among the inaugural class of inductees to the Miller Family Wayne Law Alumni Wall of Fame, which honors the extraordinary professional successes and contributions of graduates, former faculty and staff of Wayne Law.

"Judge Joiner was a tremendous advocate for our students," said Wayne Law Interim Dean Lance Gable. "The legacy he leaves behind is that of integrity, fairness and compassion. He is deeply missed by us all."

Prior to becoming dean of Wayne Law and his appointment to the federal bench, Joiner taught at the University of Michigan Law School. As a scholar, he authored six books and was passionate about continuing legal education. Joiner also was at the center of the first national effort to provide a program of continuing education for lawyers returning home after war.

"In his four years as dean, Charles Joiner brought his respected national reputation, infectious enthusiasm and expertise to Wayne Law," said Distinguished Professor Alan Schenk. "He promoted the talented students and faculty among the leaders of the Michigan Bar and American Bar Associations, and lifted the stature of the law school in Michigan and nationally."

Services for Joiner were held on Friday, March 17. To read his full obituary, visit law.wayne.edu/rememberingcharlesjoiner.