For couple, immigration crisis a reminder of what it means to be a lawyer

On Sunday, June 11, 2017, Justin Hanna got an urgent phone call from his then-fiancÃ©e, Nora Youkhana. 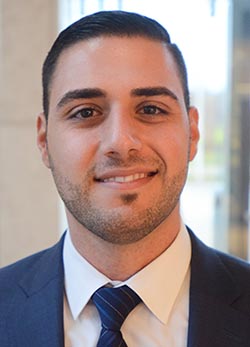 She told him that U.S. Immigration and Customs Enforcement (ICE) officers were arresting about 150 members of the metro Detroit Chaldean and Iraqi community, intending to enforce old removal orders without giving the detainees a chance to explain to a court why it was no longer safe for them to return to Iraq. The raids were part of the Trump administration's push to step up immigration enforcement.

Newlyweds Hanna and Youkhana, both 2015 graduates of Wayne State University Law School, have Chaldean Catholic backgrounds. Youkhana, who came to America from Iraq at the age of 4, normally handles cases ranging from automobile negligence to police brutality with Feiger Law. Hanna, born in the United States to Chaldean immigrant parents, is an attorney in the Corporate Practice Group at Jaffe Raitt Heuer & Weiss.

Both Hanna and Youkhana sprang into action when the raids took place.

For Hanna, learning the ins and outs of immigration law as fast as he could during the crisis was "like drinking from a firehose."

Youkhana was not an expert in immigration law either, but in 2016, she, with Nadine Yousif Kalasho (Wayne Law class of 2012), had founded nonprofit CODE Legal Aid Inc. to help immigrants with legal counsel.

"I came to start CODE Legal Aid because I myself am an immigrant and I saw firsthand the need in the community," Youkhana said.

When the raids took place, CODE was flooded with calls from frightened families. The small nonprofit opened its office that evening after the attorneys had worked all day at their regular jobs, and hustled to organize a response to the crisis. Youkhana called Hanna, and also called another friend from law school, Bonsitu Kitaba (Wayne Law class of 2014), who works for the American Civil Liberties Union of Michigan.

The ACLU mobilized to help the detainees, and so did Hanna's firm.

"The day after the raids occurred, Ira Jaffe walked into my office and asked how the firm could help," Hanna said. "The very next day, we had a group of 20 attorneys and paralegals from throughout the firm at the ready, transforming our executive boardroom into a makeshift command center, to assist CODE in their efforts ensuring all detainees had legal representation. During the course of that evening, our Jaffe team identified 16 individuals set for deportation without legal counsel, drafted 32 emergency motions and even booked a flight to Washington, D.C., for a Jaffe attorney to file emergency motions early the next morning - all pro bono.

"Our passion-filled team was made up of people of all ages, ranks, religions, races and ethnicities. There was only one of 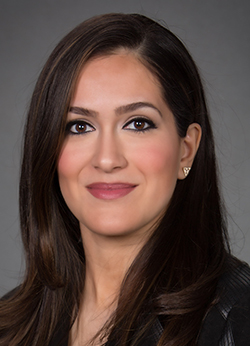 The Jaffe team provided more than $180,000 worth of pro bono legal services, and funded legal fees for others, Hanna said.

"That month, other attorneys at my firm helped take on my normal workload so I could focus my efforts on the emergency immigration situation," he said.

Youkhana said she and Hanna spent the next few weeks learning as much as they could about immigration law and trying to help the families in crisis.

"It's difficult to balance your for-profit work and pro-bono life," she said. "You take them both personally, but when someone's life is at stake, it's a different ballgame."

And lives truly were at stake for some people ICE was trying to deport, some of whom had lived in the United States for most of their lives. The Chaldean and Assyrian Christians especially face religious persecution, torture and even death if they are sent back to Iraq.

Other attorneys, including a law professor and two Miller Canfield principals (among them alumna Kim Scott), joined the efforts to help those detained. U.S. District Court Judge Mark Goldsmith, Eastern District of Michigan, granted the team an emergency order to stop the deportations until the detainees could go to immigration court. Some of those immigrants have become American citizens since then, and others have been released from detention on bond to make their cases in court.

Hanna's work is back to normal now.

"I love what I do as a corporate and commercial real estate transactions attorney," he said. "However, at the end of the day, people go to law school because they inherently want to help others. When my community came under attack, there was no question that something needed to be done."

Youkhana, too, is back to a more normal life. But the crisis of the raids has affected forever the way she thinks of her work as an attorney.

"The pro bono work has made me realize just how powerful, impactful and important my job is," Youkhana said. "As attorneys, we hold a lot of power that we sometimes take for granted. We oftentimes don't realize how amazing it is to be able to speak to a judge or know the law. Every day, since this incident, I remind myself of just how much responsibility we have in our role as attorneys and counselors."